How to Connect Modern Cable to Your TV 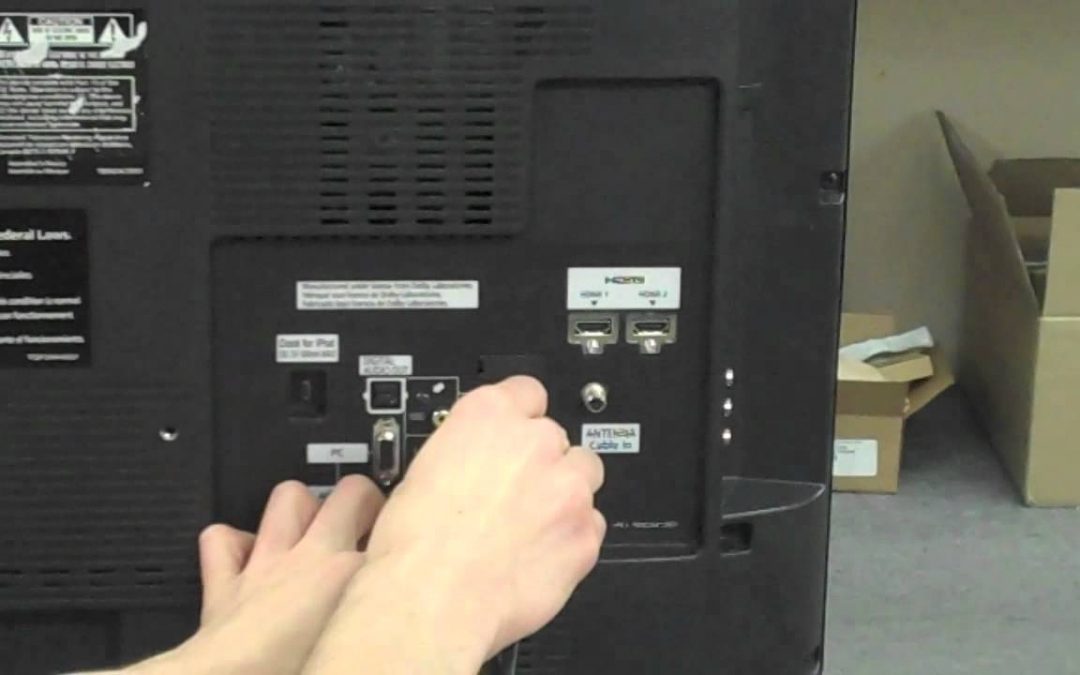 You’re not the most modern entertainment consumer.

But with what many people call the golden age of television upon us, you’ve decided to take a baby-step into the future.

Or maybe, you’ve moved in to a new apartment and have no idea how your dad set up that cable box fifteen years ago.

Whatever the reason, connecting modern cable to your TV can be a hassle for those unfamiliar with electronics.

To guide you through this process, here’s everything you need to know.

Quick Navigation
Getting the Basics Out of the Way
1. Xfinity
2. DirectTV
3. Dish
4. Sling TV
Hooking Up the Cable Box
Now You Can Set Up Your Remote and DVR
Welcome to the Future of Home Entertainment

Getting the Basics Out of the Way

Before attempting to hook up cable, you’re going to need a cable provider. Which cable providers are available to you depends entirely on your location, but the usual suspects are Dish, DirectTV and Xfinity. While all of these options have their ups and downs, some are considered better than the others.

Here’s a list of some of the most popular choices.

Xfinity has a generally positive perception, partly because they offer greater variety in their package plans. It also happens to be the most widely available provider, so there’s a good chance you fall under their umbrella. Among their most popular cities are Denver, Chicago and Houston.

Speaking of Xfinity’s large offering of packages, this can be one of the more confusing parts of purchasing cable. There are thousands of channels, but the average consumer only watches about 20. So, before settling on a package, make sure you’re getting the channels you want.

Even though Xfinity has had a bad past with customer service – it’s part of the reason they rebranded, having previously gone by Comcast – the American Customer Satisfaction Index shows that public perception has been gradually increasing.

DirectTV is going to be the go-to cable provider for those looking to take a deep dive into the world of sports. They offer several exclusive channels that focus entirely on baseball, football, soccer and almost any other sport you can think of.

Even though its spread isn’t quite as far-reaching as Xfinity, DirectTV is still a widely available provider. One thing they provide that others don’t is cheap introductory prices, designed to rope you in and get you accustomed to their service. While this might sound good, it comes with the inevitable price hike once your introductory period is over.

It should also be noted that DirectTV is one of the first providers to work in 4K programming to their packages. Even if the 4K selection is scarce at the moment, it shows a willingness to dive in once the 4K train really gets going.

Even though Dish can’t beat DirectTV’s introductory prices, it does prove to be the cheaper option in the long-run. It also has a much better DVR, a device that comes with most modern cable boxes. A DVR is a built-in device that allows you to record live television, so you never miss anything.

Dish’s Hopper 3 Smart DVR is superior to the others because it can record up to 160 programs at once, which is much more than the others can. It can also record 300 more hours of HD content than the DirectTV DVR.

For those who have gone all in on technology, the Hopper 3 Smart DVR has integrated Amazon Alexa technology, so you can use your voice to switch between shows. This means that not only has walking to the television to change the channel become antiquated, but so has lifting your arm to point the remote. The future is a beautiful thing.

This is one of the more unusual options for cable, as Sling TV isn’t technically cable, but does access many of the same channels that cable does. It’s not cable because its broadcasts are done entirely through streaming.

Instead of having a physical box, it’s accessed through an app, which can be found on most streaming platforms, such as Apple TV, Roku and the Xbox One. While there are some other streaming services that offer cable channels, few of them also offer a cloud-based DVR, which Sling TV does.

Because it’s not technically cable, you’re not going to get as many channels as services such as DirectTV and Xfinity can provide. However, if you’re a cord-cutter and are only looking to watch that one AMC show that can’t be found anywhere else, Sling TV might be your best bet.

Hooking Up the Cable Box 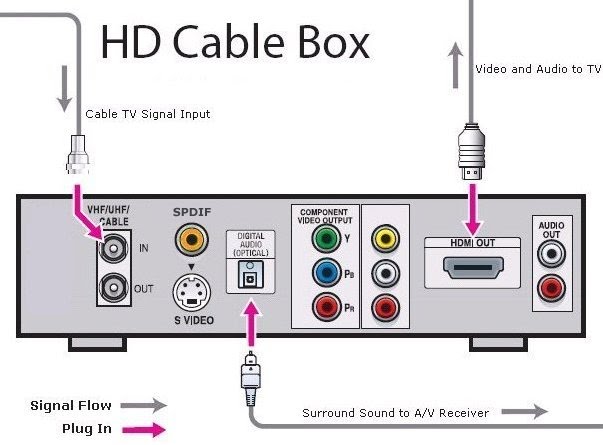 Once you’ve allied yourself with a cable provider, you should receive a cable box. While the provider might offer to hook it up for you, they’re probably going to charge you for that service. This is money that can be saved, as hooking up a modern cable box isn’t nearly as complicated as you might think. In fact, it’s much easier than it used to be.

First of all, any modern-day cable box needs a coaxial cable, which runs from the cable connection on your wall to your cable box. Even though they’re outdated, many cable boxes still have RCA ports. If your TV is a standard-definition television, you’ll use RCA plugs to connect your cable box to your television.

If you have an HD television, you’ll eschew the RCA ports for the HDMI port. Unlike the RCA ports, which require three plug-ins, an HDMI port only requires one. For HDMI, you’ll want to take note of which HDMI port you’re using, as there are usually two. If you’re using HDMI 1, then you’ll need to set your television to that specific input.

After that, you should simply follow the on-screen instructions that will guide you through the rest of the set-up process. This process will be different for every cable provider, but will certainly be simple enough to work through on your own.

Now You Can Set Up Your Remote and DVR 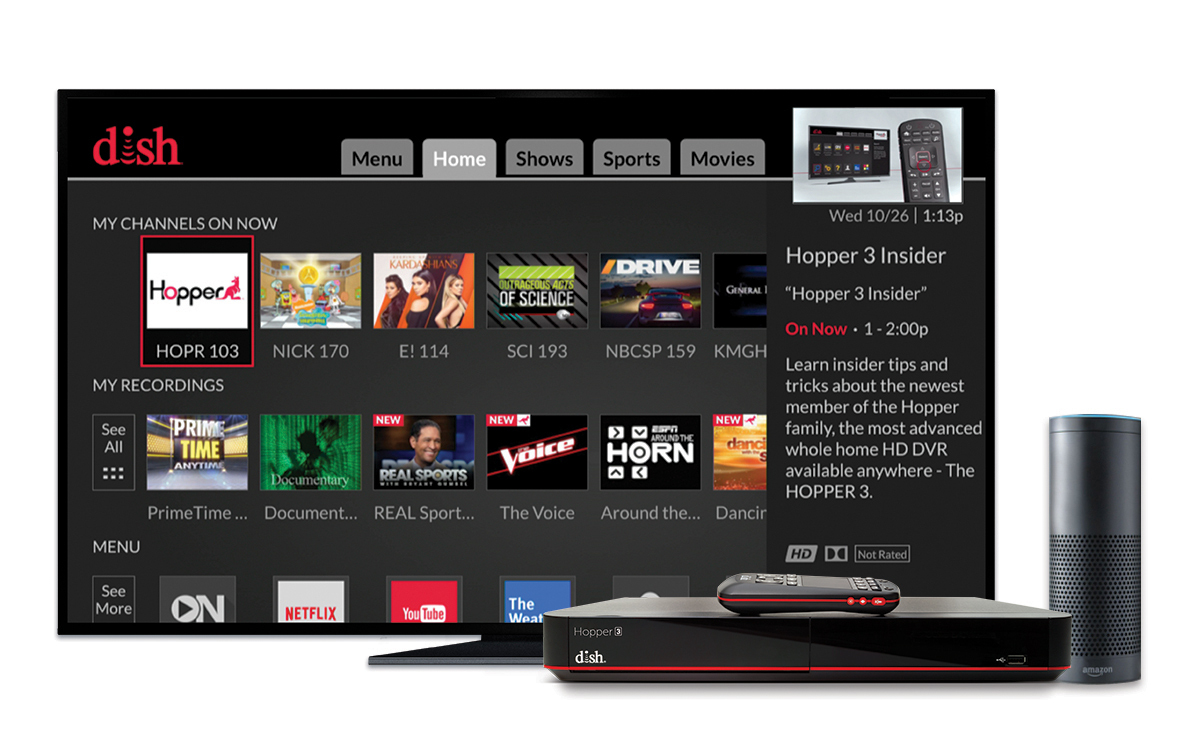 Along with your modern cable connection, your cable box comes with a few other goodies. The most familiar will be the remote. This remote is specifically designed to operate your cable box and it won’t be automatically connected once you take it out of the box.

However, tethering the remote to your cable box is fairly simple. You simply need to add batteries and follow the instructions provided with your cable box. The reason they can’t be listed here is because every remote is different, but the process usually involves holding down a button on the remote.

Aside from the remote, you’ll also receive a DVR. This isn’t a separate entity; it’s built into the cable box. This is quickly going to become one of your favorite aspects of your cable box, as its utility cannot be overstated. Most people appear to agree, as it’s projected that by 2019, over 43 million Americans will own a DVR.

The DVR (digital video recorder) allows you to record live programs for later consumption. Gone are the days of rushing home to catch your favorite prime-time drama. Simply record it and you can watch it whenever you’d like.

Not only does recording a program allow you to customize your consumption of your favorite media, but it allows you to fast-forward through the commercials. Even when you’re watching live television, you can rewind at any time.

Recording shows isn’t the only way to ingest media with your new DVR. DVRs are able to connect to the internet, so you can easily access on-demand movies and TV shows that you might have forgotten to record. It’s never been more difficult to fall behind on your favorite shows.

Welcome to the Future of Home Entertainment

Science-fiction can sometimes make the future seem like a scary place.

But with the recent advances of cable television and DVR technology, every day feels a little cushier than the last.

Even though it’s not necessarily life-changing, the wealth of options that cable offers and the ability to record live programs to watch on your own time is, without question, a vast improvement on the television of the past.

In fact, at the rate we’re going, the future is going to make the present look like a scary place.

Now that you’re all caught up on how to connect modern cable to your television, you can partake in that wonderful future.